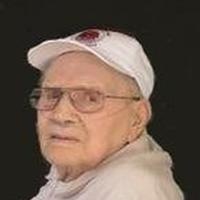 Stanley L. Hoffman, age 85 of Linn, passed away on Thursday, August 11, 2016, at the Missouri Veterans Home in Cape Girardeau, Missouri.

Stanley was born on December 13, 1930, in Perryville, Missouri, a son to the late Herman and Marie (Guyout) Hoffman.

Stanley was a 1949 graduate of Perryville High School and a Veteran of the United States Air Force.

Stanley was retired from Union Electric where he had worked as a lineman.

Stanley was a member of St. George Catholic Church in Linn.

He enjoyed gardening, watching football, hunting, fishing and visiting with friends and family.

In addition to his spouse and parents, Stanley was preceded in death by: a granddaughter, Lili Probst and a son-in-law, Edward Meyers.

Expressions of sympathy may be made to the Missouri Veterans Home in Cape Girardeau, Missouri.

To order memorial trees or send flowers to the family in memory of Stanley L Hoffman, please visit our flower store.