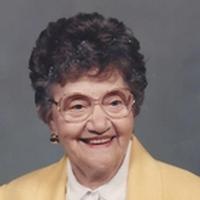 Thelma was born July 4, 1920, in Linn, a daughter to the late Luster and Pearl (Mantle) Hicks.

Thelma was a 1938 graduate of Linn High School.

Thelma was employed at Vogel Insurance Company for five years and then went to work for Missouri Power and Light Company from 1962 until her retirement in 1984.

Thelma was a very devoted member of St. George Catholic Church in Linn. She was a very sweet, proper and classy woman. She enjoyed growing flowers especially tulips, reading the newspaper, traveling to Europe, quilting, baking her famous chocolate chip cookies and her German chocolate cake.

Thelma loved being around her family especially her grandchildren. They were the sparkly in her eyes.

In addition to her parents and spouse of eighteen years, Thelma is preceded in death by her son, Larry Schaefer and a brother, Ray Hicks.

Mass of Christian Burial will be held at 11:00 a.m. on Monday, March 2, 2015, at St. George Catholic Church in Linn with Fr. Daniel Merz as the Celebrant.

Interment will follow in the St. George Catholic Cemetery in Linn.

To order memorial trees or send flowers to the family in memory of Thelma M Schaefer, please visit our flower store.