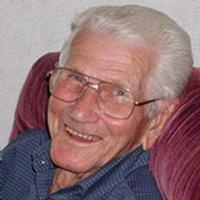 Ted attended school in Loose Creek. He was a lifelong area resident and worked as a poultry farmer and an assembly worker for Westinghouse.

Ted served his country during World War II in the Army earning a Purple Heart and Bronze Star Medal.

On November 6, 1940, Ted was united in marriage to Virginia Connell in Loose Creek. She survives at Frene Valley in Owensville.

Ted was a member of St. George Catholic Church in Linn, VFW Post #4756 and the Eagles Lodge.

Ted enjoyed hunting, fishing, dancing and traveling, however his greatest joy came from time spent visiting with his family and friends.

In addition to his parents, Ted was preceded in death by: one daughter, Carolyn Ann Mengwasser; a daughter-in law Nellie Haslag; two grandsons, Greg Haslag and Alan Atnip, one great grandson, Garrett Atnip and one sister, Louise Peters.

Interment with full military honors will be held at St. George Parish cemetery.

Expressions of sympathy may be made to the Alzheimer Association.

To order memorial trees or send flowers to the family in memory of Theodore "Ted" W. Haslag, Sr, please visit our flower store.