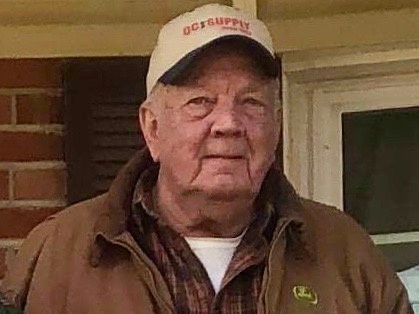 Ted was born November 26, 1944, in Vosholl, Missouri, a son to the late Theodore “Ted” Haslag, Sr. and Virginia (Connell) Haslag.

Ted was a 1963 graduate of Linn High School and served in the United States Army.

On November 28, 1963, he was united in marriage to Nellie Cavender at St. George Catholic Church in Linn.  She preceded him in death on February 13, 2000.

Ted was a farmer raising cattle, hogs, turkeys and chickens.  He also drove a school bus for Osage County RII and worked at Westinghouse (ABB) in Jefferson City before becoming employed with the Missouri Department of Corrections until his retirement.

Ted enjoyed hunting and fishing as well as spending time with his grandchildren.

In addition to his parents and spouse of 37 years, Ted was preceded in death by one son, Greg Haslag and two sisters, Carolyn Mengwasser and Betty Kelly.

Mass of Christian Burial will follow at 11:00 a.m. with Fr. Daniel Merz as the Celebrant.  Interment with full Military Honors will be in the St. George Parish Cemetery.

In lieu of flowers, expressions of sympathy may be made to St. George Capital Campaign Fund.

To order memorial trees or send flowers to the family in memory of Theodore "Ted" Norman Haslag, Jr., please visit our flower store.