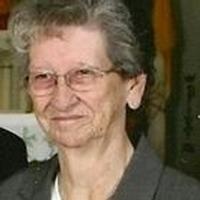 Theresa was born March 8, 1929 in Rich Fountain, a daughter to the late Joseph and Adelaide (Hertzing) Stumpe.

Theresa worked as a school cook and later as a nurse's aid at a nursing home. She was a member of Sacred Heart Catholic Church, St. Ann's Sodality, quilting circle and Western Catholic Union. Theresa's hobbies included quilting, sewing, gardening, canning and spending time with her family.

In addition to her husband and parents, Theresa was preceded in death by: three infant sons, one brother, one sister, one grandson, Matthew Brandt, one great grandson Logan Brandt and two daughters in law, Bonnie Brandt and Jeanette Brandt.

Mass of Christian Burial will be at 11:00 a.m. Monday, April 4, 2011 at Sacred Heart Catholic Church with Fr. Phil Niekamp as the Celebrant. Interment will follow in the Sacred Heart Church Cemetery.

Expressions of sympathy may be made to Sacred Heart Church or school.

To order memorial trees or send flowers to the family in memory of Theresa M. Brandt, please visit our flower store.