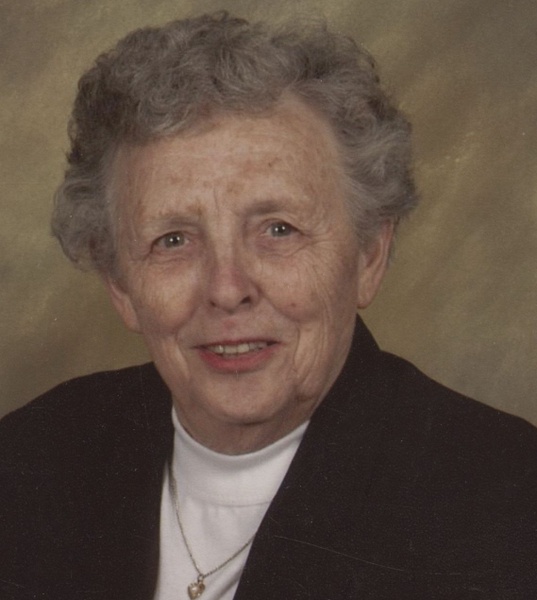 Theresa was born June 12, 1928, in Vienna, a daughter to the late George Joseph and Christina (Luecke) Stratman.

She attended Visitation Grade School in Vienna and was a 1947 graduate of Vienna High School.  She also attended college classes in Warrensburg.

At the age of 18 she began teaching grades 1-4 in a two-room school in Brinktown.  After 5 years, she taught grades 1-4 at Renneke School in Argyle for one year.  After six years of teaching, Theresa began working for the State of Missouri as a keypunch operator for the Department of Social Services until she and Wilbert started their family. Wilbert and Theresa ran the family farm raising turkeys, chickens, cattle, and crops.

Theresa enjoyed cooking, especially making her homemade bread, working in her gardens, raising chickens, picking up pecans and walnuts, quilting, fishing, attending neighborhood get togethers, playing card games, reading, music, and she was very devoted in praying her rosary. She always placed her family first and her children and grandchildren were her greatest enjoyment.

In addition to her parents and spouse of 59 years, she was preceded in death by one sister, Sr. Agnella Stratman A.S.C.; one brother, George Stratman; two grandsons, Andrew and Peter Rustemeyer; three brothers-in-law, Leonard Muenks and his wife, Alvina, Gerald Muenks and Jim Kever; three sisters-in-law, Dorothy Schmitz and her husband Virgil, Laurine Bias and her husband Lucian, and Helen Jacquin and her husband Robert.

Expressions of sympathy may be made to Masses or Loose Creek Sewing Circle.

To order memorial trees or send flowers to the family in memory of Theresa E. Muenks, please visit our flower store.