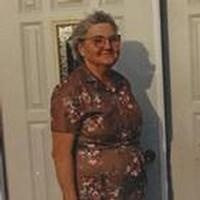 Velma was born March 26, 1916, a daughter to the late George and Carolyn (Schultdz) Gove in Hope. She also attended school in Hope.

Velma was a homemaker and lived all her life in the Hope area. She was a lifelong member of Salem Hope Presbyterian Church, a member of the church's Quilters Group and Ladies Association. She enjoyed her garden work and loved spending time with her grandchildren and family.

In addition to her husband and parents, Velma was preceded in death by: her twin sister, Selma Lipskoch; one brother, Kenneth Gove; three half sisters, Anna Schulte, Mary Hemeyer, and Minnie Grannert; and one sister-in-law, Selma Hilkerbaumer.

Funeral Services will be held at 2:00 p.m. on Monday, March 26, 2012, at Bethel-Salem Presbyterian Church in Hope with her nephew, Rev. Donald Hilkerbaumer and Rev. Bob Bailey officiating. Interment will follow in the Hope Salem Cemetery.

Expressions of sympathy may be made to the Hope Salem Cemetery Association or Hospice.

To order memorial trees or send flowers to the family in memory of Velma L. Niewald, please visit our flower store.