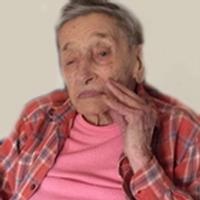 Verla was born on March 5, 1931, in Crook, Missouri, a daughter to the late Clarence and Anna (Bacclesse) Mathews.

Verla was a homemaker and a member of the Church of Christ.

In addition to her parents and spouse of 41 years, she was preceded in death by: a twin sister, Verda M. Mathews; a sister, Roena Jane Mathews; and a grandson, Jason Wolfe.

Funeral Services will be held at 10:00 a.m. on Saturday, October 31, 2015 at Morton Chapel in Chamois with Pastor Doug Kuebler officiating. Interment will follow in the Ferguson Cemetery.

Expressions of sympathy may be made to the Ferguson Cemetery or a charity of the donor's choice.

To order memorial trees or send flowers to the family in memory of Verla A. Wolfe, please visit our flower store.