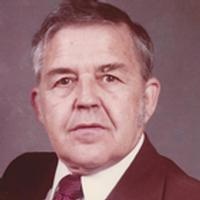 Vernon was born in Mansfield, Ohio on April 15, 1918, a son to the late Clyde and Beulah (Marmet) Morton. He was the eldest of seven siblings.

Hard times during the depression forced the family back to Osage County, where Clyde's family (Henry Clay and Georgia Morton) still farmed near Chamois. As the family gradually recovered economic footing, Vernon, his father and brothers founded Morton's Funeral Home in Linn in the 1930's.

Vernon graduated from Linn High School, served in the 45th infantry in WWII "liberating" Europe before coming home to marry Mary Ruth Dessieux on September 22, 1945. She preceded him in death on March 9, 2007, after 62 years of marriage and two children, Leah and Michael.

Vernon was a member and board advisor of St. John's Methodist Church, served as Osage County Coroner for a number of years, was a member of Linn Masonic Lodge #326 A.F. & A.M., Linn VFW Post # 4756, Linn Volunteer Fire Department and Ambulance. But mostly to his family, he was the worker bee who kept all the home fires burning so that his family was able to live out their dreams.

In addition to his spouse and his parents, Vernon was preceded in death by: three brothers, David "Dick" Morton, Bernard "Bernie" Morton and Glendale "Corky" Morton; and one sister, Geraldine "Gerry" McCarty.

Funeral Services will be held at 11:00 a.m. on Saturday, January 31, 2015, at St. John's United Methodist Church in Linn with Rev. Floyd Gudde officiating. Interment with full military honors will follow in the Linn Memorial Park Cemetery.

To order memorial trees or send flowers to the family in memory of Vernon M. Morton, please visit our flower store.