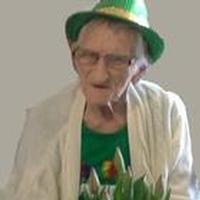 Vera was employed at Carter's, a carburetor plant in St. Louis. She retired after 39 years.

Vera was a member of Local UAW #618 in St. Louis, Missouri Council of Senior Citizens, Senior Olympics, and the Silver Steppers Dance Group.

She enjoyed playing bingo, singing, celebrating St. Patrick's Day and she loved being around people.

In addition to her parents and spouse, Vera was preceded in death by: two brothers, Joseph and Edward Friel and four sisters, Celia Marrs, Margaret Potter, Rita Farris and Mary Ruth Friel.

Funeral Services will follow at 11:00 a.m. on Saturday, April 19, 2014, at Morton Chapel in Linn with Fr. David Means officiating.

Expressions of sympathy may be made to Oklahoma Church of Christ or Osage Christmas Wishes.

To order memorial trees or send flowers to the family in memory of Veronica Haeffner, please visit our flower store.