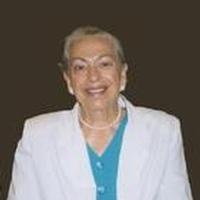 Ginnie was born August 18, 1933, in Parsons, KS, a daughter to the late Joseph Elmer and Mina Belle (Farran) Magers.

Ginnie was always involved with children. She was a bus driver and teacher for the Living Faith Academy School in Ashland and enjoyed babysitting. Ginnie was always helping children learn about God and the bible.

Ginnie was an active member of Linn Family Worship Center. She volunteered at the Good Shepherd Food Pantry and at the Linn Community Skilled Care Nursing Facility.

Ginnie had the most loving heart and always had open arms for any person or animal who might have lost their way. Ginnie, her daughter and granddaughter had just returned from an 80th birthday vacation to Nevada to visit her sister, Phyllis, and enjoyed a family reunion. Her greatest joy was her grandchildren who she loved with all her heart. She will be lovingly missed and remembered by all those who knew her.

In addition to her parents, she was preceded in death by: one son, Charles W. Morrow; four brothers, Vernon, Donald, Bill and Bob Magers; and one brother-in-law, Don Gleason.

In lieu of flowers, expressions of sympathy may be made to the Linn Family Worship Center.

To order memorial trees or send flowers to the family in memory of Virginia Lee Magers-Davidson, please visit our flower store.