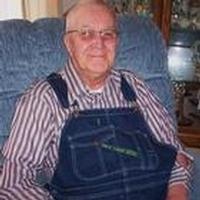 Wilbert was born August 22, 1919, in Mint Hill, a son to the late Emil and Emelia (Linhardt) Heidbrink.

On October 2, 1940, Jack was united in marriage to Frieda Hollandsworth at Mt. Sterling. She preceded him in death on December 27, 1997.

Jack was a lifelong area resident and longtime farmer. He was a member of Pilgrim Lutheran Church and the Men's Club, and a member of the American Legion Post in Bay.

Jack enjoyed gardening and continued to grow tomatoes after moving into Autumn Meadows.

In addition to his wife and parents, Jack was preceded in death by: three sisters, Ruth Oberkrom, Ruby Gove, and Esther West; two brothers, Walden Heidbrink and an infant brother, Chester Heidbrink; two brother-in-laws; one sister-in-law, and one granddaughter.

Expressions of sympathy may be made to the Pilgrim Lutheran Church

To order memorial trees or send flowers to the family in memory of Wilbert E. Heidbrink, please visit our flower store.