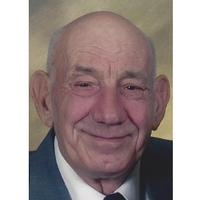 Wilbert "Billy" John Muenks, age 86 of Loose Creek, passed away Saturday, February 20, 2016, at St Joseph Bluffs in Jefferson City with his family by his side.

Billy was born January 23, 1930, in Cadet Creek, located near Loose Creek, a son to the late Gerhard and Helen (Porting) Muenks.

On May 30, 1956, he was united in marriage to Theresa Elizabeth Stratman at Visitation Catholic Church in Vienna. They were blessed with six children. Together they raised turkeys, chickens, cattle and grain on their family farm. Theresa survives at the home.

Billy was a life-long member of Immaculate Conception Catholic Church in Loose Creek, a member of the Bonnots Mill Knights of Columbus Council #2027, and the Holy Name Society. He served on the school board in Loose Creek when his children were in school. Billy also was an avid bowler and a Red Cross Blood Donor.

Billy, along with his brother Gerald helped their dad, Gerhard and Uncle Aloysius Muenks begin one of the original turkey producing farms in Osage County. Billy raised turkeys for over 60 years. Along with raising turkeys he drove grain trucks, hauled poultry and lime, and did custom farm work. He loved to work his crop ground along the Osage River bottoms. His wife Theresa and son Danny were always by his side to help with the farming operation.

Billy's greatest joys were his family and visiting with neighbors and friends. He enjoyed showing and explaining his turkey operation. He loved to share family history with his nieces and nephews, trot-line fishing, riding his four-wheeler, tractors, and taking drives around the countryside. He enjoyed playing cards with his January birthday friends each year. He took great pride in being able to sit at the table and eat food that had been grown on his farm. Billy enjoyed ending his meal with a big bowl of ice cream.

In addition to his parents, Billy was preceded in death by: two brothers, Leonard Muenks and his wife Alvina and Gerald Muenks; three sisters: Dorothy Schmitz and her husband Virgil, Laurine Bias and her husband Lucian and Helen Jacquin; one sister-in-law, Sr. Agnella Stratman, ASC; one brother-in-law, George Stratman; and two grandsons, Andrew and Peter Rustemeyer.

with Fr. Louis Nelen as the Celebrant

with Fr. Louis Nelen as the Celebrant

To order memorial trees or send flowers to the family in memory of Wilbert Billy J. Muenks, please visit our flower store.