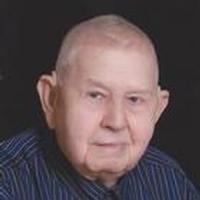 Wilbert was born October 1, 1925, in Linn, a son to the late Bernard and Agnes (Thoenen) Voss.

On May 23, 1953, he was united in marriage to Agnes Louise Klebba at St. George Catholic Church in Linn. She survives at the home.

Wilbert was a lifelong area resident and worked as a truck driver for Opies hauling milk for 42 years.

Wilbert was a member of St. George Catholic Church and the Catholic Knights. He was a charter member of Linn VFW Post #4756. He enjoyed bowling, playing cards, fishing, dancing, playing scratch off lottery tickets and puzzles. He also enjoyed flowers and gardening, eating popcorn and was an avid St. Louis Cardinals fan.

In addition to his parents, he was preceded in death by three sisters, Mildred Sallin, Helen Owens, and Jane Wilson.

Mass of Christian Burial will be held at 11:00 a.m. on Saturday, June 8, 2013, at St. George Catholic Church in Linn. Interment will follow in the St. George Parish Cemetery with full military honors.

Expressions of sympathy may be made to St. George Catholic Church or Linn VFW Post #4756.

To order memorial trees or send flowers to the family in memory of Wilbert J Voss, please visit our flower store.