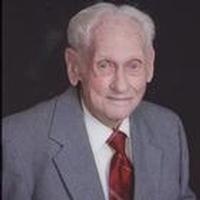 Bill was born on September 15, 1922, in Miller Grove, Texas, a son to the late Elbert Bruce and Rama Alice (Lamb) Anderson. Later his family moved to Independence, Missouri. At the age of three his mother died and at the age of seven, his father married Esther Miller Lambeth and they moved to Linn.
She was a really good mother to Bill.

After returning from the service in 1945, Bill went to work for Gasconade Power and Light, later Missouri Power and Light/AmerenUE. He was a "trouble shooter" and worked in all the towns around Linn for 40 years.

On May 1, 1948, Bill was united in marriage to Rose Marie Boes in Linn. She survives at the home.

Bill was a charter member of the VFW Post 4756 in Linn, Fraternal Order of Eagles life membership in Jefferson City, Linn Lodge A.F.A.M. 326 and a member of St. John's United Methodist Church. He served on the Osage County R-II School Board and was a member of Linn Junior Chamber of Commerce. He also was a volunteer firefighter for Linn and volunteered his time helping the Boy Scouts.

Bill enjoyed fishing and hunting but especially loved spending time with his grandchildren.

In addition to his wife of 65 years, Rose, he is survived by: one son, Gary Lynn Anderson and his wife Nadine of Linn; four granddaughters, Jessica Anderson of Rolla, Julie Painter and her husband Travis of Peoria, IL, Ashley Anderson of Linn, and Kristen Anderson of Linn; two great grandsons, Landon and Oliver Painter of Peoria, IL as well as many nieces, nephews and friends.

In addition to his parents, Bill was preceded in death by: two brothers, Lee M. and Loren B. Anderson and one sister, Ruby Anderson Macklin.

Funeral Services will be held at 10:00 a.m. on Thursday, March 6, 2014, at St. John's United Methodist Church in Linn with Rev. Floyd Gudde officiating. Interment will follow at the St. George Cemetery in Linn with full military honors.

Expressions of sympathy may be made to St. John's United Methodist Church or Linn VFW Post 4756.

To order memorial trees or send flowers to the family in memory of William H. Anderson, please visit our flower store.