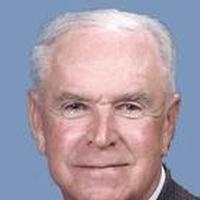 William "Bill" Joseph Bledsue, age 81, of Jefferson City, passed away from Leukemia on Friday, September 23, 2011, at his residence surrounded by family.

Bill was born March 19, 1930, in Linn, a son to the late Robert Lee Bledsue and Margaret Ann (Schmitz) Bledsue-Groves.

Bill was a Linn High School graduate and a United States Air Force Veteran serving during the Korean Conflict.

On June 2, 1956, he was united in marriage to Anna Mae Berhorst at Sacred Heart Catholic Church in Rich Fountain, MO. She survives of the home.

Bill worked for the Missouri Department of Transportation for 40 years before retiring in 1995.

Bill enjoyed spending time with his family as well as fishing and gardening. He was an avid St. Louis Cardinal and Mizzou Tiger fan.

In addition to his parents, Bill was preceded in death by: his step-father, William Groves; and one sister-in-law, Merrieum Bledsue.

Mass of Christian Burial will be at 11:00 a.m. on Monday, September 26, 2011, at St. George Catholic Church with Fr. I.C. Medina as the Celebrant. Interment will follow at St. George Cemetery in Linn with full military honors.

Expressions of sympathy may be made to SSM Hospice, American Cancer Society, or American Heart Association.

To order memorial trees or send flowers to the family in memory of William Joseph Bledsue, please visit our flower store.