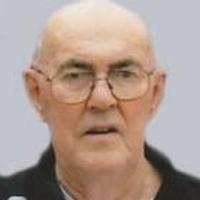 Bill was born June 15, 1925, in Morrison, a son to the late William and Clara (Schmidt) Hackmann

On June 24, 1950, Bill was united in marriage to Bernadette Schneider at the Assumption Catholic Church in Morrison. She survives at Frene Valley Health Center in Hermann.

Bill was a member of St. George Catholic Church in Linn and enjoyed fishing, gardening, mowing the grass, playing cards, playing his steel guitar and his lawn tractors.


In addition to his wife, Bill is survived by: one grandson, Tylor A. Hackmann of New Bloomfield, sisters-in-law, Dorothy Hackmann of Hermann, Mariland Hackmann of Linn, Marie Hackmann of Chamois, Rita Klick and Henrietta Schneider of Hermann as well as many nieces and nephews.

To order memorial trees or send flowers to the family in memory of William Hackmann, please visit our flower store.