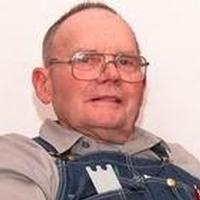 Willis spent his life as a farmer in the Morrison area and was a member of St. John's United Church of Christ in Chamois. He enjoyed gardening, helping his neighbors, delivering meals for the Osage County Nutrition Center and visiting with friends both at the Nutrition Center and the shoe store.

Willis is survived by: one sister, Mardelle Prenger of Jefferson City; one aunt, Alma Cremer of Lakeport, CA; one niece, five nephews, and several great nieces and nephews.

In addition to his wife and parents, Willis was preceded in death by one brother, Ernest J. Burbach.

Funeral Services will be at 11:00 a.m. on Friday, January 27, 2012, at St. John's United Church of Christ in Chamois. Interment will follow in Deer Creek Cemetery.

Expressions may be made to the Osage County Nutrition Center.

To order memorial trees or send flowers to the family in memory of Willis H. Burbach, please visit our flower store.