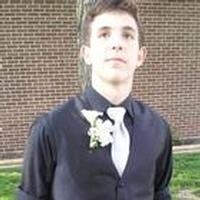 Zac Honey, age 17 of Chamois, passed away Saturday, June 21, 2014, from injuries sustained in an automobile accident.

Zac had just completed his junior year at Chamois High School where he was very active in basketball, track and cross country.

Zac had worked part-time at Nolte Hills Nursery and Deer Creek Trucking. He had recently been hired by the City of Chamois as summer help.

Zac was a very caring individual who lived life to the fullest. He always made you laugh and was known to bring a smile to your face by his funny dance moves and phrases like "Click, Click, Boom" and "Too Turnt Up". Zac loved all sports and enjoyed working out. He always tried to encourage his classmates to do their best. Zac was somewhat of a "dare devil" always being the first to try new things. He was known to bring home stray animals and he always made time for his family and friends. Zac made everyone's world brighter.

In addition to his parents, Zac is survived by: five siblings, Sebastian, Gaige, Griffen, Rourke and Declan Honey all of the home in Chamois; maternal grandmother, Vonna Arnsemyer of Union; paternal grandparents, Stephen and Mary Walezak of Overland; Great Grandmother, Myraline Slusser of Chamois; his girlfriend, Michaela Nolte of Chamois; and several aunts, uncles, cousins and friends.

Funeral Services will be held at 11:00 a.m. on Wednesday, June 25, 2014, at Morton Chapel in Chamois with Rev. Frank Husted officiating. Following the funeral service there will be a luncheon at the Chamois Lions Club Building.

In lieu of flowers, expressions of sympathy may be made to the Family of Zac Honey to be distributed to various clubs at Osage R-1 School District in Zac's memory.

Arrangements are under the direction of Morton Chapel, Chamois, Missouri (763-5522)
www.mortonchapel.com

To order memorial trees or send flowers to the family in memory of Zac Honey, please visit our flower store.